Moment to moment: My final day at the Daily Camera 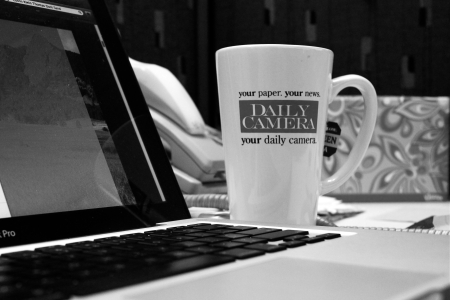 Note: For the full effect, play the video below then read.

I came in late on the final day of my internship.

I had a good excuse. I needed to print a final story for a class. And plus, I wasn’t late. That often anyway.

At the beginning of the internship, everything seemed right. Even now, as I file my final story for the Daily Camera, I feel like it was just another good day.

I never had a bad day while interning here. I’m being honest. I never felt out of place, never felt mistreated, never felt uncomfortable with any story I was assigned. I worked twice a week, writing about a story a day, meeting friendly people, making great friends and connections (crossing my fingers for that last one).

Of course this doesn’t mean this was a boring internship.

Some of my best clips will now proudly bear the Daily Camera header. Just look at my site. I ended up writing more than 12 stories, all of them averaging about 500 words or so. Most of them started out with more than 700. Suffice to say I was working with solid editors.

I covered everything from city council shake-ups at Nederland to Scott Carpenter Park’s dog days, which was my first story. It was also the only story I managed to squeeze into the front page.

I covered a woman who is well on her way, rowing alongside five other women, across the Atlantic in a non-stop journey to help raise money for charity.

There was Coupe Studios, a place so mellow and cool I felt like I was back in California. (I like Boulder, but I will always be a Son of the Golden State.) This story allowed me to use ‘Wu-Tang Clan’ in my story, in addition to the word ‘inception,’ both of which were words I was very much eager and determined to use in a story.

Most stories where fun. Few had bad interviews. Fewer still bored me when I wrote them.

The most crucial lesson this internship taught me was writing on a daily basis with a daily deadline. My previous internships offered the luxury of days, even weeks before a final deadline.

Deadlines where an every day resolve while I worked here. They were guidance when I lacked focus or energy. They were friends when I felt I was lacking effort. They were motivation.

It was all an educational adventure. Moment to moment, word by word, it was learning about the craft I desperately want to be a part of when I graduate.

I bid the Camera and it’s staff adieu. But more importantly and more sincerely, I thank everyone who helped me learn.

It’s been real. Thank you all.

One thought on “Moment to moment: My final day at the Daily Camera”